we welcome hearing other resources

Economistdiary.com ask chris.macrae@yahoo.co.uk for 30 minute free claricifation zoom - as well as how you can help -including search of library versions of The Economist 1843-1993 ; notes on what keynes said general theiory money, interest, employment;

Notes from 2 biographies of von neumann and The Economist and 2025 report surveys of - Neunanns AI question from 1945 what goods can peoples unite with 100 times more tech per decade:

here are some key dates: we began survey with advice from Neumann 1951 and with help from Economist Jouralists to 1988:

The economist 1982 review of why not everywhere benchmark with silicon valley diversity of entreprenurial revolyions needed; publiscation from 1984 of 2025 genre - 3 billion new jobs- adapted in different languages to swedens new vikings coorodor 1993 at which time completion of von neumann biography became a priority 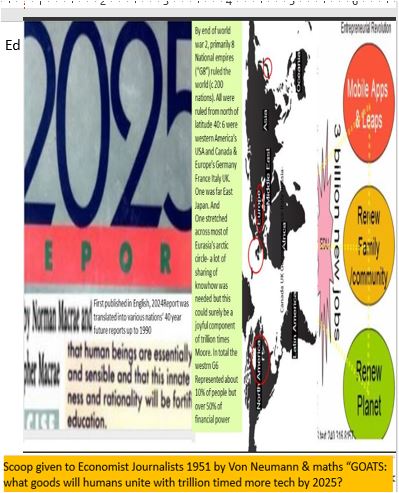 typical jobs in adbanced countries before digital webs from 1990

typical jobs in rural regions without access to electricity adbanced by 1 billion girls until they had acceess to solar and mobile -also know as cases at abedmooc.com before 1996-1999 where partnership platforms started leapfrog models with mobile and scale

When I joined the Economist in 1983, Norman Macrae was the deputy editor. He died last week at the age of 86. Soon after I joined the staff, a thing called a computer terminal appeared on my desk and my electric typewriter disappeared. Around that time, Norman wrote a long article that became a book/genre 2025 Report co-authored with his son Christopher and a Sci-Fi writer who asked for anonymity about the future. It was one of the strangest things I had ever read.

It had boundless optimism --

Over the last decade, I have written many articles in The Economist and delivered lectures in nearly 30 countries across the world saying the future should be much more rosy. This book explores the lovely future people could have if only all democrats made the right decisions.

combined with a weird technological vision --

Eventually books, files, television programmes, computer information and telecommunications will merge. We'll have this portable object which is a television screen with first a typewriter, later a voice activator attached. Afterwards it will be minaturised so that your personal access instrument can be carried in your buttonhole, but there will be these cheap terminals around everywhere, more widely than telephones of 1984. The terminals will be used to access databases anywhere in the globe, and will become the brainworker's mobile place of work. Brainworkers, which will increasingly mean all workers, will be able to live in Tahiti if they want to and telecommute daily to the New York or Tokyo or Hamburg office through which they work. In the satellite age costs of transmission will not depend mainly on distance. And knowledge once digitalised can be replicated for use anywhere almost instantly.

and a startlingly fresh economic perspective --

In the 1890s around half of the workforce in countries like the United States were in three occupations: agriculture, domestic service and jobs to do with horse transport. By the 1970s these three were down to 4 per cent of the workforce. If this had been foretold in the 1890s, there would have been a wail. It would have been said that half the population was fit only to be farmworkers, parlourmaids and sweepers-up of horse manure. Where would this half find jobs? The answer was by the 1970s the majority of them were much more fully employed ( because more married women joined the workforce) doing jobs that would have sounded double-Dutch in the 1890s: extracting oil instead of fish out of the North Sea; working as computer programmers, or as television engineers, or as package-holiday tour operators chartering jet aircraft.

Some will say [I have] been too optimistic. That is what a 65-year-old like me finds it natural to be. When I joined The Economist in 1949 it seemed unlikely that the world would last long. But here we stand, 40 memory-sodden years on, and what have we done? What we have done - largely because the poorest two-thirds of people are living much longer - is approximately to octuple real gross world product. During the brief civilian working lives of us returning soldiers from the second world war, we have added seven times as much to the world's producing power as was added during all the previous millennia of homo sapien's existence. That may help to explain why some of us sound and write rather tired. It does not explain why anybody in the next generation, to whom we gladly vacate our posts, can dare to sound pessimistic.

attached is a longer outline of book - first 1984 version is free at 2025report.com ; first decade uodate for sweden 1993 available on reqy=uest chris.macrae@yahoo.co.uk

needed to guard against fake media and pr lies - did opposite (from cigs to guns) ;

which other goals needd a dao and blockchain

missing training of maths gaots and embedding with daos databases

IF SCHOOLS were child centric they would make age relevant interventions:

teachers would be celebrated for clarifying which skills involve experiential learning not classroom examination - while there is some recognition that music and sports involve practice, its shocking that coding isnt valued this way ..

Do you have life-changing moment to share? - what was it and what did you think or do differently after it?

example until 9/11, i assumed that (good) futures are happening somewhere in the world and would be searched out so that all could communally replicate them;  === 9/11 caused me to question whether global connectivity will give us time to find sustainable solutions for our kids- i became particulaly interested in places where good education leaps appeared but did not get app'd the world over - one example actually goes back to my favorite 1990s advances in schools that a small cliuster of new zealand schools pioneered - download it here https://oiipdf.com/download/the-learning-revolution

i welcome discussion of this book's parts at any time rsvp chris.macrae@yahoo.co.uk if you have a solution every community that develops youth could be cooperational

== we live in an age where most up to half of knowhow of techforgood changes every 3 years - we needed mindsets for exploration not for being standard examined; a nation that makes its college students its largest debt class is likely to collapse economically socially environmentally if web3 is designed for celebrating sustainability cooperation; and if web3 is not designed for neough yout to linkin the first sustainability generation then we are all heading the way of the dodo

I am learn to learn

Some people say that Virtual or Augmented Reality has advanced at its best so far in last 12 months that there are hardly any qualified teachers only pioneering explorers- does this matter - well its VR which is your gateway to web3 - intead of just a mobile device you will like wear  a visual sensor system; equally others argue that you shouldnt worry about how fast you put googles on - what you should want is to take back ownbership of what you spend time creating virually- look at the small print of the big platforms you probably dont own anything without them..maybe this is a generation issue bu interstingly the met-generation can now work on chnaging anything that old systems are destroying (eg climate) ...t

Crypto - can communities celebrate financiang their own most urgent sustainability cooperations? if they dont who wil?

one of the main debates how to help teachers in arctic circle schools empower their students to use virtual reality to visit other arctic circles schools communities; many of the changes and solutions are analogous; I am reminded by educators leading the compilation of virtual realty libraries of the DICE acronym - a reen might want to do something dangerous like climb everest, why not VR simulate that? there are impossible things a trainee doctor will never be able to travel inside a humans gut but that can be VR'd; there are catastropghic simulations - you would rid the world of bees just to test if donald is wrong about nature being more powerful than he is, you can simulate it; or the future of smart tourism may be curation of what a community is proudest of being visited for - this way ecotourism, cultural appreciation exchanges can be twinned to maximise celebration of each other- and by the way friends of the tourist can join in virtually- of corse this raises a metaverse question - that Hong Kong is leading the world on